Winner of 2nd Annual Airway Article of the Year Announced 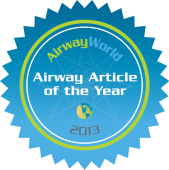 In a live webinar December 13, Airway World announced the winner of the second annual “Airway Article of the Year” award. Calvin Brown III MD, guest hosting for Ron Walls MD, Ali Raja, MD, and Cheryl Lynn Horton, MD, selected and presented four articles as nominees. The nominees were chosen from among all the articles covered during the Airway Management Research Update webinars in 2013.

The content and merits of each article were discussed and debated, and The importance of first pass success when performing orotracheal intubation in the emergency department by John Sakles MD, Stephen Chiu MD, Jarrod Mosier MD, Corrine Walker MD, and Uwe Stolz, PhD, MD was chosen the winner by vote of the on-line audience during the show.

In Sakles’ study, the researchers reviewed data collected from 1,828 intubations performed at an academic emergency department in Arizona over 4 years to determine the association between adverse events and number of intubation attempts. They found that the incidence of adverse events increased with the number of attempts. Specifically, the incidence of adverse events went from 14% for the first attempt to 47%, 64% and 71% for the second, third and fourth (or higher) attempts, respectively. According to Diane Birnbaumer, MD who reviewed this study in NEJM Journal Watch, this study underscores the “importance of maximizing the likelihood of success on the first attempt. Preoxygenation, proper patient positioning, appropriate equipment choice, and limiting the number of attempts by inexperienced trainees should be standard practice for every endotracheal intubation.”

View the Airway Article of the Year award show in its entirety.